When a celebrity or influencer undergoes a cosmetic procedure, it can be tempting for a salon offering the same treatment to utilise the handy publicity.

When that celebrity is Kim Kardashian West, and she has 156 million Instagram followers, it seems like a no-brainer to use that publicity to your advantage, right? Think again.

The reality star has sued Alabama-based Doctor Charles Runels for using her name and likeness in his marketing collateral following her use of his patented ‘Vampire Facial’.

Kim underwent the procedure – which sees the client have their own blood drawn, spun to separate the plasma from the red blood cells and then have that plasma injected back into their face – on her reality show. At the time, she uploaded a photo of her bloodied face to her social media platform.

Runels immediately used the image – as well as additional images of the reality star – on his web page, social media accounts and his LinkedIn page, to promote the procedure that he invented. 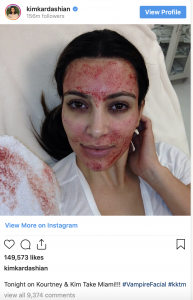 According to Kim’s attorneys, she contacted Runels immediately, requesting he remove her images. When he didn’t, she called in the big guns, and filed a case with the US District Court of California.

The complaint – currently awaiting verdict – states that, “While Ms Kardashian did get a Vampire Facial…she certainly never licensed her name in connection with the procedure.” The statement also declares that “Ms Kardashian’s actual endorsement for a nationwide campaign such as this would command a fee well into right figures. Setting aside the monetary value, however, it is Ms Kardashian’s choice whether or not to commercially endorse another party’s goods and services.”

As in America, is it also illegal in Australia to use a person’s name or face on any public forum to promote any product or service without their consent. And given that over 150 clinics in Australia offer Runel’s Vampire Facial, it’s worth noting that subscribing to Runel’s marketing strategy could see them receive a similar court order.