Sophie, who has been living with the “genetic, hormone, metabolic and reproductive disorder” since she was just 17, is a Melbourne-based blogger, mum and business owner “best known for her no-holds barred approach” in sharing honest stories about her life (including her “battles” with the symptoms of the disorder).

In fact, Candela Australia appointed Sophie, who has 250,000 Instagram and 144,000 Facebook followers, as ambassador for the Gentle Series as she has regular laser hair removal treatments due to excessive hair growth caused by PCOS.

“We have formed a partnership with her to discuss her PCOS journey in the digital space to bring greater awareness to possible treatment options,” said Candela Australia marketing manager Mike Reid.

“Sophie’s first Instagram post for the Gentle Series (pictured) received more than 11,000 likes and over 300 comments,” he said.

“The comments were mainly from other women with PCOS talking about their experience with excessive hair growth – and there was lots of positivity towards Sophie for being so open about it.” 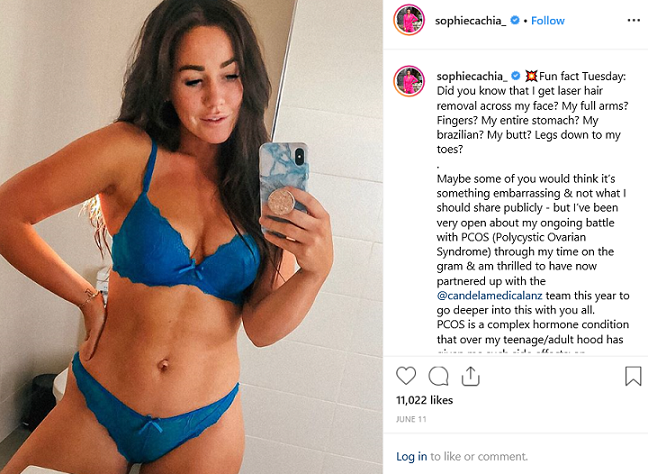 As PCOS is “the leading cause of infertility” for women and “a precursor for other serious conditions including obesity, type 2 diabetes, cardiovascular disease and endometrial cancer”, we thought this month was the ideal time to ask Sophie a few questions about her journey and help raise awareness of the disorder:

When did you get diagnosed with PCOS?
“I was diagnosed with PCOS at 17 years of age. I’d suffered extremely heavy but equally as irregular periods since the age of 15, I had excessive hair growth and my hormones were out of control.”

What are some of the issues you have to deal with due to the condition?
“The obvious hair growth issues (darker and thicker that average, and growing in ‘uncommon’ areas), hormone imbalances, thyroid complications, acne, and an extremely painful menstrual cycle.”

Why did you decide to share your journey with the condition on social media?
“Living a raw and authentic life on social media has been something I’ve always done from day one, and something I hold really important to me. I generally like to share things that happen in my life as they play out, so speaking about a condition I’ve now battled for over a decade is something that came quite naturally for me because it’s such a huge part of my life. I also know how common it is (PCOS affects one in 10 women) so I knew there’d be a very interested audience out there who might benefit from me speaking about it openly and honestly.”

What methods have you previously tried to get rid of the excessive hair growth?
“Shaving and waxing. And guess what guys? The hair always grows back!!”

How effective has the Gentle Series been in helping you treat/manage the condition?
“The fact I have not only been able to significantly reduce the amount of hair on my body, but completely change the density and coarseness of it has been instrumental in me gaining some self and body confidence back. Obviously, you have to shave in between treatments, but any hair that does grow back in between sessions is SO thin that I don’t even notice it!”

What is the one key piece of advice you would offer other women who have PCOS?
“Don’t be afraid to speak to people – you’ll honestly be so surprised at how many people suffer with PCOS and all in their own individual way. Side effects will differ from person to person, but for me personally it’s been so lovely to hear from others about their journey and be able to relate to pieces here and there.”